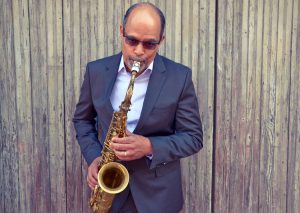 “Marshall Keys’ dulcet tones and earthy compositions conjure the spirits of jazzmen past and future.”

From mainstream to contemporary, from bebop to hip-hop, he plays the saxophone with a sense of grace and emotion that is wholly without cliché.

Saxophonist Marshall Keys represents as high a level of musicianship as can be found anywhere, and his versatility and strong sense of melody have made him somewhat of an icon in his native Washington, DC. He interprets improvisational music in its many forms and his performance schedule reflects this diversity. Marshall has received a National Endowment for the Arts grant and was commissioned by the Smithsonian to perform the works of Wayne Shorter. He was guest performer and lecturer at the Romare Bearden Exhibit at the National Gallery of Art. He has enjoyed two collaborations with Mexican jazz pianist Juan Jose Calatayud at the Mexican Cultural Institute in Washington, DC and at the Museum of Latin American Art in Long Beach, California. He has toured Central and South America twice for the State Department as a Jazz Ambassador and In
May of 2005 traveled to Guinea, West Africa to perform and to lecture on the history of jazz in the US. 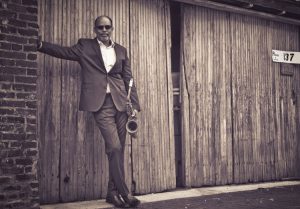 In August of 2009 he was guest soloist at the Ford Amphitheater in Hollywood, California playing music from the Harlem Renaissance. He joined Jason Moran’s Bandwagon at the Kennedy Center for two performances in 2012, and backed Stevie Wonder at the Howard Theatre in February 2013. The Marshall Keys Group performs at the DC Jazz Festival every year it is held.

He has worked with many of the world’s greatest musicians including: Jimmy McGriff, Jimmy Scott, Lionel Hampton, Stevie Wonder, Clark Terry, Jimmy Heath, Groove Holmes and Jimmy Witherspoon. He has played in jazz festivals in the US, Germany, Ireland, Holland, Mexico, Indonesia, The Virgin Islands and was a featured performer on the 17th Annual Norway Jazz Cruise, and the East Coast Jazz Festival in Washington, DC.
Marshall began his training in the DC Youth Orchestra Program and continued it in the Jazz Studies Program at Howard University. He cut his teeth playing in local bands before gaining his first professional experience with The Blackbyrds and a long association with the great blues organist Jimmy McGriff with whom he recorded the album “Countdown”.